The MaNima Magnus is a professional LED controller with an industrial design intended for controlling digital LED installations in the architecture, recreation and entertainment industry.

Universes
The Magnus series currently consists of 6 LED interfaces, each with a different number of channels (universes). The Magnus can control multiple protocols at the same time, even up to 13312 channels (at 26 universes) depending on which Magnus interface is used. All universes can record while playing (WYSIWYG). The channels can be divided between 6 SPI outputs and 2 DMX outputs. If 26 universes are not enough, it is possible to connect an infinite number of MaNima Magnus interfaces and synchronize them together in a network, the only limitation being the network itself.

Applications
The MaNima Magnus is often used in:

Can be combined with: 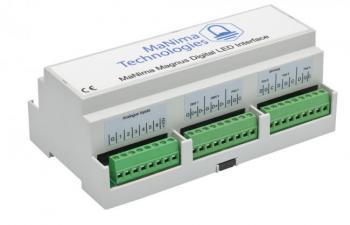