LED light therapy is based on the natural regenerative capacity of the skin. It appears that certain types of LED light stimulate cell division and production of new cells and repair tissue. LED light is used for cosmetic purposes, for wound repair in muscle and skin disorders and for the treatment of cutaneous lymphoma.

The effect of light therapy
LED light therapy is based on the use of LED light with different wavelengths. Colors from the visible color spectrum are used, as well as ultraviolet LED light and infrared LED, which is in the electromagnetic spectrum. Each color has its own wavelength to which the skin reacts differently. The nature of the radiation therefore determines the effect of the LED lighting on the skin.

Red, deep red and infrared LED light
Red and deep red LED light is used for treatments on the deeper skin layers, for combating aging symptoms and for deep skin repair. This color also has a calming effect on inflammatory symptoms and boosts blood circulation. Infrared light penetrates even deeper into the skin than red light. This makes it suitable for the treatment of bones, joints and muscle problems. It is used cosmetically for severe acne with a lot of inflammation and consequent scarring.

Blue LED light
Blue LED light does not work under the skin but on the surface. It has a positive effect on acne and an antibacterial effect that eliminates subcutaneous bacteria. Blue LED light in skin therapy also promotes skin regeneration from third degree burns.

Ultra violet LED light
Ultraviolet LED light is used with the aim of removing complaints of skin diseases. UV LED light is available in various wavelengths, namely UV-A (long wave UV light), UV-B (medium wave) and UV-C (short wave). Each UV wavelength has a different effect on the skin. Only UV-A and UV-B are suitable for light therapy. The UV light influences cell growth and inhibits the inflammatory process in the skin. Also for skin lymphoma (skin cancer that does not arise from sunlight and UV radiation) UV LED light can be used as skin therapy. 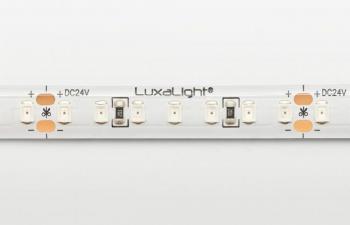