Stability and processing power
The vast majority of digital LED controllers on the market do not have sufficient stability and processing power and also cannot be adapted to the requirements set for projects. The MaNima controllers (Magnus and Ignis) on the other hand, are digital LED interfaces that have a lot of computing power (up to 26 universes), stable and adaptable. They can be fully personalized and provided with custom options.

Universes
If 26 universes are not enough, it is possible to connect an infinite number of MaNima Magnus/ MaNima Ignis digital LED drivers together and synchronize them together in a network, the only limit being the network.

Magnus
The MaNima Magnus is often used in recreation and entertainment applications, such as museums, theater and cinemas. But also as architectural lighting, in public spaces, luxury homes (housing), gyms and fitness clubs. The Magnus can easily be used as an LED interface with many additional functions such as digital and analog triggers, built-in effects (no lighting controller is needed) etc. If a project requires a lighting controller, the MaNima Magnus can receive Art-Net via its Ethernet -gate. The MaNima Magnus can be used with: ELM, Madrix, MadMapper, Skandal's POET, Resolume, ArKaos, GrandMA, Pixxem, ONYX and many more.

Ignis
The MaNima Ignis is often used in industry, such as industrial machines, sorting machines, as indication lighting and in warehouses. The Ignis is also often used in infrastructure, for example at crosswalks or at tram doors. This interface makes it possible to define and activate individual LEDs with UDP commands and digital and analog inputs. 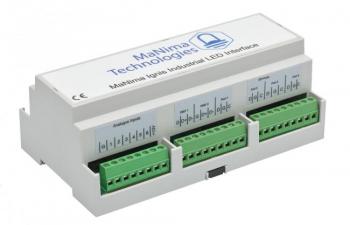